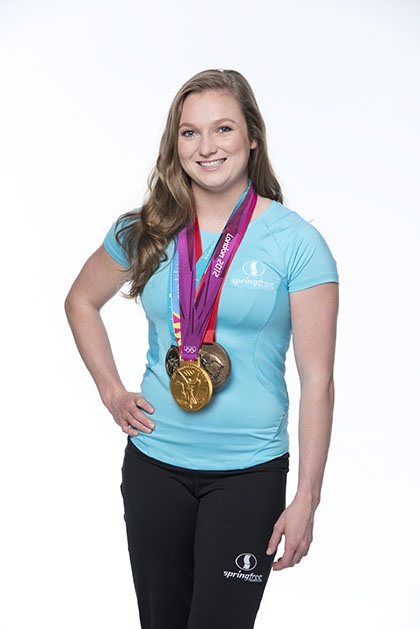 As the youngest of four, Rosannagh (Rosie) MacLennan often tagged along to her older siblings’ lessons. When she was 7, Rosie could no longer stand and watch from the sidelines and she finally got her turn on the trampolines at Airborne. When her brothers’ feet started hitting the roof, all four kids switched to Skyriders Trampoline Place where Rosie continues to train.

At the 2007 World Championships in Quebec City, Rosie earned a spot for Canada at the Beijing Olympics alongside longtime friend, synchronized trampoline partner and fellow Olympian Karen Cockburn. At the 2008 Beijing Olympics, Rosie qualified for the finals and eventually finished in 7th place overall.

Rosie’s competitive performance this past year demonstrated that she is a rising star in her sport. She won a gold medal at the 2011 Pan American Games in Guadalajara, Mexico. This was followed by a second place finish at the Trampoline World Championships in Birmingham, UK where she earned her ticket to the London 2012 Summer Olympics.

Most recently, Rosie competed at the test event for the 2012 London Games where she came in first place, beating out fierce competition.

Rosie is grateful for the critical support provided by her sponsor Springfree Trampoline that allows her the opportunity to pursue the sport she loves.

Rosie is recent graduate of the University of Toronto with a bachelor’s degree in Physical Education and Health. Even off the trampoline, she remains active through some of her favourite sports like skiing, snowboarding, wakeboarding or dancing.